I read some of the comments on the Sally Challen Appeal with interest. The reality of what Coercive Control is needs to be effectively understood if Sally Challen’s predicament is to be fully appreciated. I saw in many comments that CC is being described as psychological abuse. I think this is a fundamental misunderstanding, and it’s very important that this misunderstanding doesn’t continue to characterise CC.

Psychological abuse is a method used by controlling people to exert and maintain control – as is financial abuse, sexual abuse, gas-lighting, violence, and so on. Coercive Control is a campaign made up of any or all of these things which then trap people in a relationship, and make it impossible or dangerous to leave. Evan Stark has likened this to a hostage situation. The Homicide Timeline shows what can happen when control is challenged or irretrievably broken. Controlling people become more dangerous, threatening, and potentially homicidal. This can also push a victim to the very edge and can lead to suicide or retaliatory homicide.

We must stop characterising Coercive Control as only psychological abuse.

I have been asked many times to explain Coercive Control, I think the slide below shows how Coercive Control is the overarching motivation and abuse, and the methods below are just some of the tac-tics used. 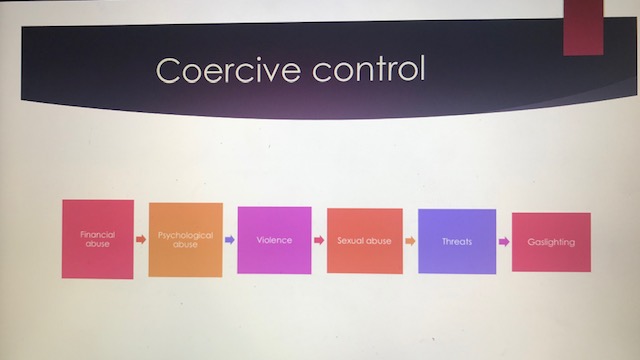